In order to enjoy life, peace of mind is essential.  Feeling safe is important, however, what you don't know CAN hurt you.
Although most women in India, the Middle East, and some other regions of the world are very aware of the dangers they face every day of their life, people, both women and men in the US, Canada, and most other western industrialized countries generally do not feel this way.   Their life is guided by three distinct beliefs, as follows:

1)  I feel safe in the place I live, in the place I work and in the places I normally walk, therefore, I am safe.
2)  I know bad things happen, but they only happen to other people.
3)  I know there are unsafe areas in my city, but I remain safe as I never frequent those areas nor would I vacation in any place I felt to be unsafe.

What people fail to realize is that “feeling safe" has nothing whatsoever to do with "being safe".   You can rest assured that 99.9% of people who are murdered, abducted, raped or subjected to a violent assault  on any given day never envisioned that would happen to them when they arose in the morning.

The fact is that up to three-million women are murdered worldwide every year and the FBI reports a violent crime occurs in the US every 25 seconds.   Furthermore, approximately 24,000 women go missing in the USA each year, and a corresponding number in Canada, most of whom are never seen again.

Rapes/sexual assaults on college campuses are at an epidemic level with 1 in 5 females students reporting that they have been victims of this crime.  However, it is much worse than this.  In 2010, the US National Crime Victimization Survey counted 1.3 million rapes yet the FBI advises that only 85,593 rapes were reported to police, making it by far the most under reported criminal offence.  In India, many women are the victims of rape and murder every single day.

There is a way a person can feel safe, however, and actually be safe.  This is the secret strategy called “Deadly Attack Survival” (DAS), which can be learned in an hour by reading the DAS book and be useable within a few days.   Martial arts training can be very beneficial but it can take many months, even years, of dedicated training under a qualified instructor to become proficient.  Martial arts training will teach you how to win a fight.   DAS is not designed to win fights, it is designed to teach you to survive the attack of an assailant who intends to kill you or cause you serious injury.   In its basic form, it consists of only one technique, a technique that can save your life.  Although this book was written with women, small men and seniors in mind, the tactics apply to everyone.


If you live, walk or work in a high risk environment, DAS is probably the most vital asset you will ever possess.


To Purchase go to:

Or FREE on Kindle Unlimited

SELF DEFENSE ON THE STREET

Book Two of the Deadly Attack Survival series explains and demonstrates how DAS can be applied in the case of assaults, attempted abductions and attempted rapes away from home. It covers various methods in which a person can be attacked on the street by one or two attackers, including defense against clubbing attacks. Also includes valuable information in developing awareness to reduce the risk of being targeted by predators. 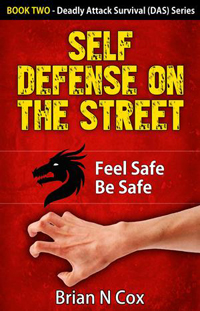 Book Three of the DAS series
To Purchase go to:

Every female, from early teens up to elderly, is the target of perverts, racists, psychopaths and human predators. According to the UN, up to 3,000,000 women are raped and murdered annually. However, very few females will take any steps whatsoever to learn how to protect themselves from these men. They don't learn how to lower their risk of being a victim and don't learn how to defend themselves if and when they are attacked. This seems to defy logic...but there is a reason.

Women are psychologically conditioned from childhood, that there is no defense against a big, strong, intimidating male. If you are attacked, you cannot prevent it...you cannot hope to defend yourself successfully...you are at the mercy of your attacker...end of story.

Of course none of this is true, but it is very difficult for a female to overcome a lifetime of psychological conditioning that has convinced them totally, that they are victims in this world and that fact cannot be changed. Society has done a great disservice to these women, and this conditioning has resulted in millions of unnecessary rapes and deaths. These predators aren't geniuses, and there are points are their body that makes them as vulnerable as a twelve-year old girl. Unfortuneately, the great majority of females don't know this or don't believe this, so they make themselves potential victims for the rest of their lives.

This book, Rape Proof, primarily teaches woman how to lower their risk of being a target or a victim, but if they are attacked, they will know what to do.

After many years as a police officer and law enforcement college instructor, I felt compelled to write this book because most of the books on child security miss the mark. They often provide good information but not so good advice. The fact is that “talking” to your child does not make your child safer even if the information you provide is ideal. Children must be “trained”. For example, when testing children who have been told by their parents to never go with a stranger, virtually 100% of children fail the test and go with a stranger. Pedophiles are experts at manipulating children; they do not present themselves as a stranger. This manual, therefore, is for both parents and children so that children can be “trained” about stranger danger, road safety, fires, dangerous chemicals, drugs, cyber safety, etc. Don’t think for one minute that “talking” or “explaining” about safety and protection to your child will suffice…it will not. Train your children how to protect themselves; you will not be with them all the time.

To purchase go to Amazon...http://amazon.com/dp/B01BWT9JFE